🪶 Skull With an Indian Headdress Tattoo

Those are some of the adjectives that are used to describe tattoos featuring skulls wearing a traditional (or non-traditional) Native-American headdress. Such designs are popular with all genders, for the design can be wholly simplistic or as complex as you desire. Native-American skulls vary from tribe to tribe, but overall the symbolism that’s behind them is respect, pride, leadership, loyalty, and heritage. Popular Indian skull tattoos feature bright and colorful headdresses with large feathers. These powerful headdresses can represent the fierceness and intensity of the warrior in question as well as the cultural connection to a specific tribe, making these the perfect symbol of fight and strength. The image, of course, may also have a darker meaning- the skulls also speak to the struggle of Indigenous tribes, who have historically encountered violence while being forced out of their land.

Indian skull tattoo is well suited for someone with a Native American background who wishes to honor their tribe’s traditions, a specific ancestor or Indian warrior in their bloodline. PRO TIP: It is important to know that getting a tattoo that portrays Native Americans or any of the Native American symbolism (headdress, feathers, dreamcatchers, etc.), without belonging to Native American culture, heritage and tradition, is considered offensive and disrespectful.

Though no color is used in the non-colored (BW) version of this tattoo, there is an air of strength and power. The darker the skull, the more menacing it looks, so for those who are looking for a tattoo style with impact, you might consider a black skull with white features. Furthermore, shading, heavier lines, and angles can create a truly stunning design. Another way to create pop is to have the background of the Indian skull a different color. A black background is excellent for making a contrast between white bone and feathers. But there’s no denying how awesome a blood-red background looks too. Focus on the Headdress and Feathers

Some people might want the skull to be the most detailed section of the tattoo. So in their search for style and inspiration they may opt for highly detailed plumage. In Indian lore, the larger the features on the headdress, the greater power the warrior held—so you can use that for inspiration. But headdress is also the most intricately detailed section to which you must pay special attention. You can add colors, make it monochrome, adorn it with beads, bones, weapons, patterns, and so much more. 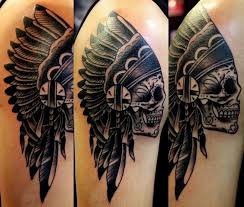 Whether the headdress is turned to the side or seen straight on, the way you choose to have the feathers designed can alter the mood of the tattoo completely. For example, the feathers can be less traditional, done in a watercolor style, be paired with other adornments, or in some cases, not look like feathers at all.

Tomahawks, spears, knives, guns, bows and arrows can also accompany the Indian skull and headdress. Axes (tomahawks) decorated with feathers and beads are often seen crossed beneath the skull, becoming an alternative skull-and-crossbones design that is eye-catching and unique. Where to place an Indian Skull Headdress Tattoo

Depending on the spread of the feathers and angling of the skull, you can put this kind of tattoo anywhere on your body.

As we already pointed several times in this article, you need to be careful when choosing the design of the tattoo as you do not wish to disrespect Native-American culture and community.

Looking for a way to test out your tattoo idea before getting permanently inked?

Check out our Temporary Tattoo Designs or send us your custom design!

Browse our designs    Send us your design